I hate to break it to you, but I don’t particularly care for lobster.

This usually gets a shocked look from others. It’s okay. Go ahead. Be shocked. I can handle it.

I’m not sure if my dislike for lobster is because I was raised in South Louisiana and grew up on the perfect, easily peel-able textures of crawfish and shrimp, or if it’s simply because lobster is a deep-ocean being, cold and not so fun (i.e., they’re much harder to play with at the table), or if it’s because I see lobster as a trumped-up version of what the “elite” allegedly eat with all their money and I’m fighting the man by not consuming the propaganda, even though (if I must be honest), I could probably afford it once in a while without too much of a glance, which only strengthens my desire not to eat it. Truthfully, I’ve got no idea.

Either way, I firmly believe that just because you didn’t like something you ate last year (or even yesterday), doesn’t mean you shouldn’t try it again. In fact, I am an advocate for always trying something again, especially if I haven’t eaten it in a while. For instance, as y’all know, I detest olives. But, I recognize that the distaste for them might actually be all in my head, so occasionally, I try an olive again, just to be sure. Recently, I had three (count them: THREE!) olives … and then promptly decided I still do not like them. 🙂

This commitment to the occasional taste-test has proved productive in my foodie lifetime. If you can believe it, there was actually a time that I did not like tea. Or beer. Yes – beer. Who would have ever thought that HumidFoodie didn’t like beer?! There’s a story behind that one, so I will save that for another day. Maybe I will combine it with the story of my mother and tea.

In any event, I’ve had a long 2015, but this summer, I was able to take a week off to lollygag up to Bar Harbor, Maine. I even got to see Tom Benson’s yacht, the Lady Gayle Marie! A few days after seeing it, I heard that the Bensons were entertaining the Bushes. Yes. Former President Bush. I guess owning a couple of sports teams has its perks. 😉

This is how I wound up eating my first local, fresh lobster in Bar Harbor, Maine. I call it, “The Obligatory Maine Lobster.”

The traditional seafood bake was filling. Lobster, of course, with clams and mussels, fresh steamed corn and boiled potatoes. There was butter, but I can’t honestly say that it makes lobster any better. I had it. It’s done. Then I moved on to more “exotic” but local fare:

One of the things I love the most about traveling is trying new food and meeting new people. I had the distinct pleasure of staying at Anne’s White Columns on this trip. The rooms were cozy and the people were great, but honestly, the best part was the breakfast! 🙂 A sister B&B to another up the street, the proprietors were sweeter than sweet, and Bob, the main contact, was an excellent host. He made sure I always had enough coffee … and mid-day wine …. and food … and cheese … and hot chocolate … and and AND: he plays piano in the evenings down at the Arcadia. Heads up: he takes requests! 🙂

The breakfasts alternated each day between savory and sweet, between Quiche and french toast, with “sides of” breads and muffins, with each breakfast starting with either local, in-season fruit or a fruit smoothie. Local sausage or bacon was always on the menu, ready for the eating. You know how much I love bacon … so let’s just say I was super excited to have fresh, local bacon. YUM! Bob’s wife, the infamous and namesake Anne, cooked everything fresh each day. I could never eat it all, but you can be sure I took a doggy bag with me for an afternoon snack around town. Here’s a little highlight of the breakfasts and what you can see on a walk:

The more you know about Napoleon and the Sugar Beet

A cool find in a local shop

Random house nearby, but look at those Adirondecks!

View up from balcony!

The Masons, near the B&B 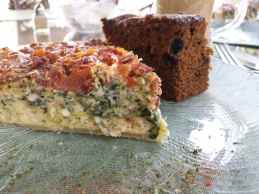 All in all, it was an excellent trip up to Maine. I was so surprised at how beautiful it was and how perfect the weather was almost every single day. The skies were such a rich blue and the colors in everything I saw, from flowers to trees … it was just magnificent. I was able to see whales up close and puffins from afar. I even rented a bike one day and rode on the bike path along Mt. Desert (pronounced dessert, gosh I love Mainers). And of course, when I say “rode” what I really mean is “coasted down hills” and “dragged the bike behind me up steep mountain hills” … you understand, right? Here are a few photos of the sights, just for good measure: 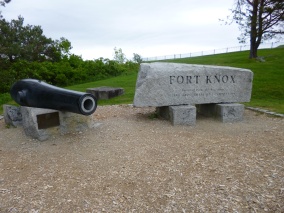 Yep! Fort Knox. Did you know there were two?

Puffins! And lighthouses, of course. Observatory for bird-watchers 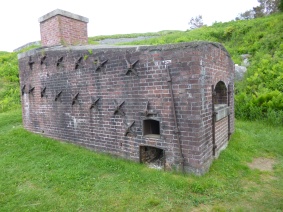 Where they kept armory, and also ovens (Fort Knox) 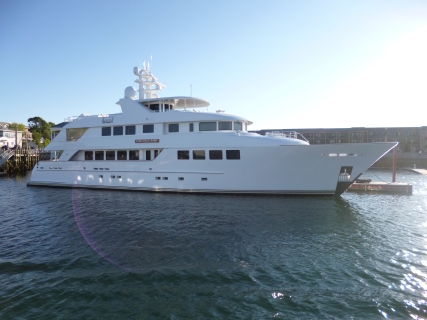 Super cute little library. The oldest one on the island! 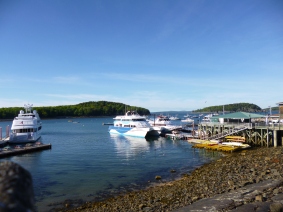 View driving over the bay into Bar Harbor 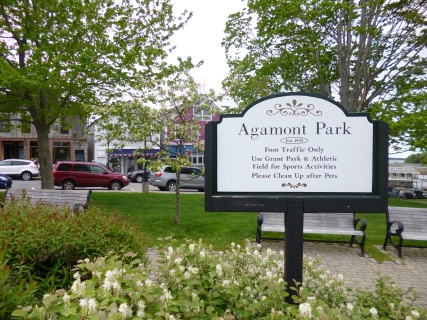 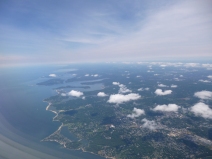 Driving down to Camden and came across this awesome bridge. It was tall alright, and also swaying in the gusts of wind. Yikes.

Stephen King broke my phone charger. On day 1. Less than an hour after arrival. Maybe that should have been a sign?

I am looking forward to going back. Although a shorter week than I’d have liked, it was still an excellent experience filled with a walk or two a day, gorgeous weather, super nice people and a comfy bed with HGTV. If you’re interested in knowing more about Bar Harbor, visit their site. There’s lots to see and do, especially for you outdoorsy-types!

Search for love on a p(a)late